Fireworks explode a little flat – A Review of Fireworks

Fathom Events and GKIDS continue to trail-blaze with Fireworks being the most recent anime film hitting US theaters nationwide. I am so genuinely glad that we live in an era where we have theatrically released anime on a large scale almost every month! The final screenings of Fireworks will be this Saturday, July 7th, so if you want to go see it, do it ASAP before it’s gone!

So, let’s talk about the flick.

Fireworks, Should We See It from the Side or the Bottom? was produced by Studio Shaft (Bakemonogatari, Madoka Magica, Nisekoi) with direction by Nobuyuki Takeuchi and Akiyuki Shinbo (the Shaft guy) and features character designs from Akio Watanabe (Bakemonogatari, The World God Only Knows, Akiba’s Trip).

The film is an adaptation of an award-winning live-action film of the same name from 1993, written and directed by Shunji Iwai. Fireworks was a single, 49 minute episode of the Fuji TV anthology series If, a collection of 16 episodes all about different “strange stories.”

Many of the costume designs are heavily inspired by their live-action origins, including Nazuna’s yukata and Norimichi’s stylin’ baggy red shirt and shorts. Even a few shots are direct homages to the original film, this one being one of the more notable frames. 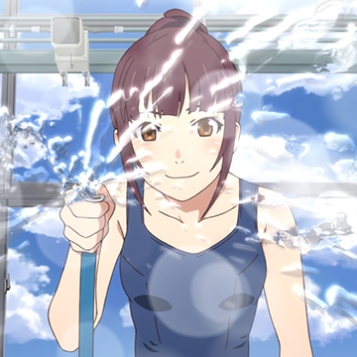 The story follows a group of middle school students in the fictional, rural town of Moshimo, Japan. Norimichi is a typical, not too bright but not too dumb, young boy and Nazuna is the quiet, eye of the class that all the boys seem to have a crush on, including Norimichi.

It’s summertime, which means fireworks, and the stupid boys of the class have a debate on whether or not fireworks explode round or flat (to which the audience screams in unison, “THEY EXPLODE ROUND YOU IMBECILES!”). This becomes so much more important than it should be through the course of the film, prompting me to groan in excess.

Nazuna comes upon a mysterious glass ball, similar to the walnut-shaped object that Makoto stumbles upon in The Girl Who Leapt Through Time. We learn that Nazuna is unhappy with her situation at home and attempts to run away on the night of the fireworks show, but her mother and soon-to-be step-father catch her and drag her back home. Norimichi witnesses this event, seeing Nazuna drop the glass ball. He picks it up and throws it out of frustration. He is then suddenly and immediately warped back in time to earlier that day, with all of his memories of the day to come still intact (similar to a Steins;Gate or TGWLTT scenario). He then attempts to use his knowledge of the day’s coming events to help Nazuna escape.

The film succeeds in almost every regard except for the one that all films need to succeed; to make the audience care about the characters and their relationships with one another. I suppose I’m old now, but the idea of two young teens falling for each other by pure force of adrenaline and hormones without any personality chemistry whatsoever strikes me as dull and uninteresting. Never once did I feel like these two kids really clicked or formed a relationship worth caring about. For that matter, there were really no relationships, or characters at all in the whole film that I was able to personally attach to. The side characters were almost totally forgettable and god-bless Norimichi but he is as boring as they come. The only character I was really able to empathize and connect with Nazuna because we learn about her life-long family troubles, but even those were more told than shown and her stand-off-ish nature feels more like the “aloof anime girl” trope rather than an actual personality.

Tobias pointed out in our discussion after the film that maybe since it’s based on an older work, that could be why the relationships and characters feel “old fashioned,” and I suppose that’s a good a theory as any, but they could have mended that by more obviously making this film a period piece. The way the film is presented, one could easily assume that this film was intended to take place in the modern day, not 1993.

Though I assume that setting it in 2017 would have nixed the whole “are fireworks flat?!” through-line because any middle schooler could have looked up enough fireworks videos on YouTube to verify it, or just pay attention in SCIENCE CLASS!

If there was a central theme of the film, it would be….the confusion of youth perhaps? How growing up is weird and sometimes doesn’t make a whole lot of sense (just like this movie)? I’m not sure. It’s certainly very visually striking, and may appeal to a very young teen audience if they are able to see themselves in the characters and situations, but apart from those elements, the film doesn’t really stand out in any unique way.

Welllllll, except for the absolutely fantastic ending credits song by Kenshi Yonezu and my girl DAOKO.

I definitely wouldn’t discourage anyone from checking out Fireworks if it looks interesting to you, but if you happen to miss it, I wouldn’t lose sleep over it.

Fireworks is licensed by GKIDS in the US with a likely DVD/Bluray release sometime in 2018 or 2019.